Tolerance implies no lack of commitment to one’s own beliefs. Rather it condemns the oppression or persecution of others (beliefs). ~ John F. Kennedy 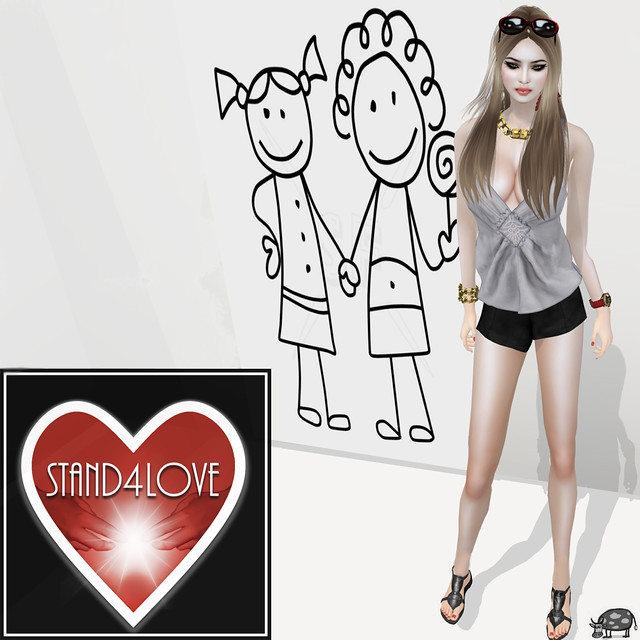 I read a comic strip on a best friends FB the other day and the details aren’t overly important but it was about homosexuality and the religious front. I can’t say that is the only vibrating undercurrent I have felt lately but this particular vibration bothers me. Every year I am a part of Second Life’s “Stand 4 Love” campaign and I always have because it’s the right thing for me to do and the right time to do it. I have always believed in a person’s right to choose who they love; it’s as natural a thought to me as the air I breathe. This year though, I don’t want to Stand 4 Love, I want to Stand 4 Acceptance. What’s the difference between the two? In my book, and this is truly just my thought, quite a lot actually. Laws are changing, people’s views are changing and you don’t hear the big expansive media outcries against homosexuality and the law anymore. Lately I feel like the pendulum has swung to the other side, but I think it’s not a groovy thing, it has done so in a very loud and hostile way. If it is unacceptable for people NOT to support a person’s right to choose a person to love, why in the world is it ACCEPTABLE for people to harass and ostracize a person’s right to love a God? Doesn’t tolerance work both ways? Is there a point where religion is no longer fashionable? ‘Ell, to be honest, I think quite a few of these people who run from one popular cause to another, hating and running, running and hating, should take a moment, sit down and watch Dr. Seuss’s “The Sneetches and Other Stories.” Heck, I reckon I’ll make it easy by including it at the bottom of this post.

Don’t get me wrong, I can’t say I am even a religious person by any means of the word. I am religious about exercising, I believe in the tides and that the sun will set and rise for another day. I believe people need to believe in some higher form, but whether it’s a God, a tree, the stars, the moon, or even Nutella and marshmallows, that’s up to the person. Who am I to say? Their walk isn’t mine and I won’t tell them what to believe even if they try to tell ME what to believe in. It’s their journey, not mine. But, seriously, when you start branding an entire group as “extremists and hate mongers” just because they believe in one savior and the edicts of the savior, well that just seems, a tad bit, unsavory. What next? Shall we drag them into the marketplace and burn them on the stake? Should they hide in their attics at night? Because from where I sit and watch, the religious ones doing all the talking? The ones the shock pop media covers? Heck, I don’t even think they are representative of the majority, they are an overzealous group of religious extremist that the media are hyperbolizing into a vast populace of bible thumping hate filled racists. Most Christians are an accepting bunch, or if not accepting at the least, ignoring. You do your thing, I’ll do mine sort of mentality.

The take from? I can’t figure out why we can’t ever get this right. Haven’t we been near here before? I know, somewhere, not overly long ago, I heard something that reminds me of this very moment in time. Right now, right here. It went something like this. “In the process of gaining our rightful place we must not be guilty of wrongful deeds. Let us not seek to satisfy our thirst for freedom by drinking from the cup of bitterness and hatred… The new militancy which has engulfed the Negro community must not lead us to distrust all white people, for many of our white brothers, as evidenced by their presence here today, have come to realize that their destiny is tied with our destiny.” Thank you for your brilliance Dr. Martin Luther King. Acceptance, now I reckon that’s a sword that cuts both ways. How ’bout you?